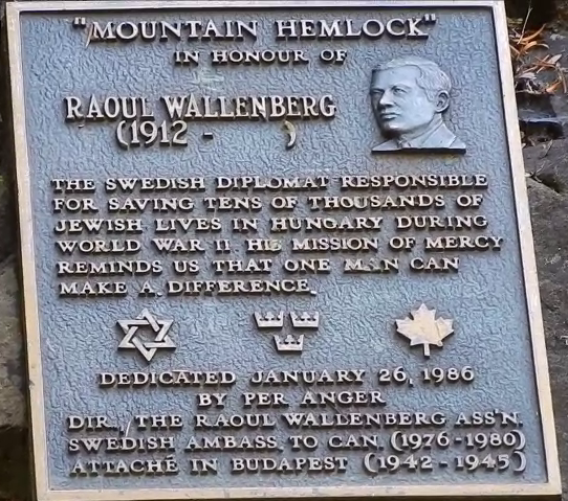 True heroism is not easy to find, but in the case of Raoul Wallenberg, we have the example of a true hero.  That’s why this plaque in Vancouver’s Queen Elizabeth Park commemorates the life and courage of Sweden’s Raoul Wallenberg.

Who was Wallenberg?  This young man from a prominent Swedish family courageously rescued tens of thousands of Jews in Hungary from certain murder by the Nazis in the Holocaust during 1944 and 1945.  His bold, untiring humanitarian efforts, and his disappearance at the hands of Soviet armed forces, have led to lengthy efforts to discover his fate.

Despite the continuing uncertainty about what happened to him, Wallenberg’s actions have been honoured around the world.  He was the first non-Canadian to be granted honorary Canadian citizenship.  He was twice nominated for the Nobel Peace Prize, and recognised as Righteous among the Nations by the world’s foremost Holocaust memorial.

In July, 1944, the Soviet Union’s Red Army was moving westward through Hungary to oust the murderous Nazi forces from Budapest.  However, the Nazis had already sent more than half of Hungary’s 800,000 Jews to their deaths, and they vowed to continue their genocide in Budapest while defending the city to the end.

Humanitarian groups and the Swedish government urgently organized a rescue mission for Budapest’s Jews.  Raoul Wallenberg was assigned to the Swedish legation in Budapest to carry out the mission.  He efficiently set to work and issued thousands of protective passports to Hungarian Jews, stating that the passport holder was eligible to emigrate to Sweden.  Wallenberg also organized over 30 safe houses for Jews, prominently labelled as Swedish properties beyond the Nazis’ reach since Sweden was officially a neutral country.  The safe houses provided food, medical care, and other necessities.  Wallenberg even intervened in Nazi deportation operations personally, at considerable risk to himself, to ensure that Jews under Swedish protection did not end up on deportation transports or death marches.  It’s estimated that over 100,000 Jews survived in Budapest through the combined efforts of Wallenberg and other diplomats from neutral countries.

In January 1945 with the Soviet troops poised to take over Budapest, Wallenberg set out to meet with a Soviet general.  We know that he was imprisoned in the Soviet Union immediately thereafter.  However, his fate remains shrouded in mystery to this day.

We work to ensure that his memory continues as an inspiring example of civil courage and the ability of just one person to make a difference.

This Plaque to commemorate Raoul Wallenberg, was installed with a ceremony in January 1986.  From the original initiative of Robert Krell, a Holocaust Child Survivor, local Child Survivors and Holocaust Second Generation group members felt strongly that Wallenberg’s courageous humanitarian work should be recognized.

The Swedish Ambassador to Canada at that time, Per Anger, who had worked with Wallenberg in Budapest in 1944, unveiled the plaque.  Per, born in 1913, was almost the same age as Raoul, born in 1912.  A fine banquet followed in the Swedish Hall with very interesting speakers.  A highlight was hearing inside stories about Raoul Wallenberg from Per Anger.  Anders Neumüller wrote a detailed article about the event in the Swedish Press, a North American publication – see here.

Twenty years passed, before there was another official gathering and recognition of the Plaque, in 2006.

In 2006, the Honourary Consul of Sweden, Anders Neumüller, invited the Second Generation Group to co-host a 20th Anniversary Commemoration of the Wallenberg plaque.  About 80 people and five speakers attended the event on January 29, which was held under pelting rain.

Lennart Österlind welcomed all on behalf of the Swedish Community, followed by greetings from the Deputy Mayor of Vancouver, Peter Ladner, who read a Proclamation for “Raoul Wallenberg Day”.  For the Second Generation Group, Gabriella Klein spoke of how her mother and grandmother survived the war together in the Budapest Ghetto, due in great part to the haven provided by one of the Wallenberg safe houses.  The Consul General of Hungary, André Molnar, acknowledged the valour displayed by Raoul Wallenberg against the face of seemingly unlimited evil.  The Honourary Consul of Sweden, Anders Neumüller, concluded the ceremony by laying a wreath on the plaque.  All gathered at the Season’s Bistro afterwards for a warm reception.

Raoul Wallenberg Day in Vancouver has since been held annually on a Sunday around January 17, when Wallenberg was taken into Soviet custody.  Up to 2021, there have been sixteen Raoul Wallenberg Day events.  They include a talk, an inspiring film on civil courage, and a concluding reception.

The Swedish Consul and the Second Generation Group presented these events, with the Vancouver Holocaust Education Centre also involved for six years.  In 2013, we formed the Wallenberg-Sugihara Civil Courage Society and began hosting the events.  Shortly after, we started presenting the “Civil Courage Award”, the inaugural one being to the Honourable Ujjal Dosanjh, a previous premier of British Columbia.  Details of past Wallenberg Days are listed on our website.  Here are the past award recipients (poster).

We hope you have enjoyed this short presentation.  In concluding, we seek your support.  We seek nominations for the Civil Courage Award (someone who at significant personal risk, has helped others against injustice, bullying or discrimination), and we seek people, especially younger folks, to join and help us carry on in the spirit of Raoul Wallenberg.