Translation of an article in the Vancouver Shinpo on January 25th, 2018.

On January 14, Raoul Wallenberg Day (media sponsor: Vancouver Shinpo) was held at the H.R. MacMillan Space Centre in Vancouver.  This year, it commended the courageous actions of Alayne Fleischmann, who made a complaint of corruption in a major United States financial institution. 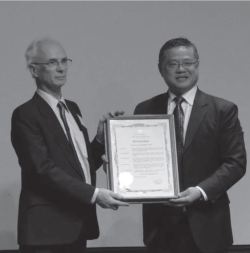 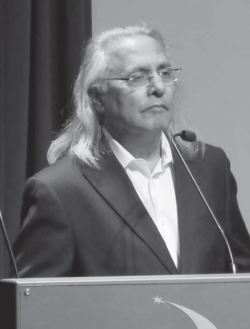 Ujjal Dosanjh, former B.C. Premier, gave a keynote speech and led a discussion with the audience

•  Honouring those who helped others through courageous actions

Honouring those who have helped others through courageous actions, the Sweden Consulate and Jewish groups have jointly held this event annually since 2006, but since 2014 the Wallenberg-Sugihara Civil Courage Society has taken over.

Raoul Wallenberg, a Swedish diplomat, was stationed in Budapest, Hungary, during the Second World War.  He issued protection certificates of Sweden, a neutral country, to Jews and hid them in a safe place.  Wallenberg disappeared after the Soviet army occupied Budapest on January 17, 1945.  Wallenberg Day is held on the closest Sunday to January 17th.  Chiune Sugihara, a Japanese diplomat stationed at the Lithuanian consulate, disobeyed instructions from the Japanese government and continued to issue transit visas to Jews for Japan.  This put him and his family at risk.  The aim of Wallenberg Day is to take to heart such a spirit by honouring those who have taken courageous actions, according to their own morals, without regard to personal dangers, like these two people. 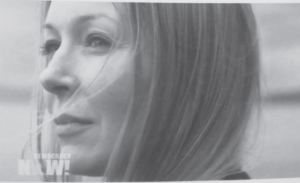 Alayne Fleischmann responded to an interview in a television program.  She was absent from the award ceremony

At the ceremony, Alan Le Fevre, chairman of WSCCS, served as host.  First, Raymond Louie, Acting Mayor of the City of Vancouver, read the Wallenberg Day Proclamation.  Next, Ana Policzer, a director of WSCCS, described the society and Wallenberg Day.  Ujjal Dosanjh, a former B.C. Premier, who received the first Civil Courage Award on Wallenberg Day in 2015, gave the keynote speech and talked about the courage and challenge to accuse colleagues.

Alayne Fleischmann, a lawyer from B.C., was honoured this time.  When she was in charge of quality control at a major financial institution in New York, she witnessed “huge illegal securities fraud” of mortgage products.  Fleischmann’s actions to stop such illegal transactions were blocked, but she left evidence and was later summoned as a witness by the U.S. Department of Justice.  The Department of Justice reached a settlement of $9 billion with the bank.  Fleischmann said she could have lost everything but thought that if she did not speak up, she would be “hiding the biggest financial cover-up in history.”  Although she could not attend the ceremony as she is still a witness, she was honoured with the award for her courage to pursue justice.  Then we watched a television program from the U.S. with an interview of Ms. Fleischmann, and Mr. Dosanjh led a discussion period with audience members, with a lively exchange of opinions. 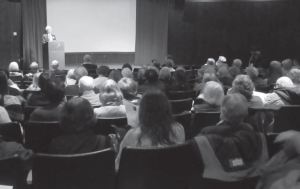 Visitors listen intently to the story