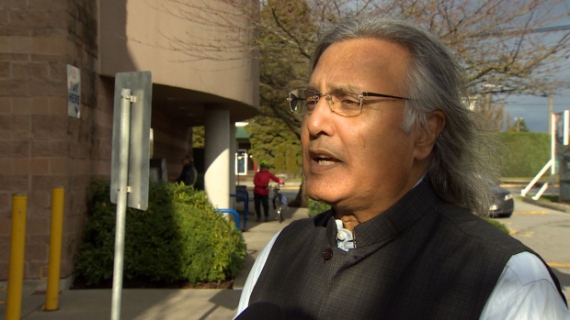 Former B.C. premier Ujjal Dosanjh has been honoured for speaking out against Sikh extremism at a dangerous time. (CBC)

Former B.C. premier Ujjal Dosanjh has been honoured for speaking out against Sikh extremism during the 1980s at great risk to his personal safety.

He is the first recipient of the award created by the Wallenberg-Sugihara Civil Courage Society, a group formed by Vancouver's Swedish and Jewish communities in 2013.

In 1985, Dosanjh, then a lawyer, was severely beaten in a parking lot with a metal bar, months before the Air India bombings. In 1999 a Molotov cocktail was left in his office.

In 2010, police investigated a threat against him on a Facebook site that called him a traitor to the Sikh faith.

He was also told he wasn't invited to the Surrey Vasaikhi parade and threatened if he did attend.

"I felt that if I didn't stand for my beliefs at that particular moment, then I would have no right to ever stand again," he said.

"Ultimately you should worry about what you believe in, what you stand for. And if you stand for nothing, you could die for anything."

Dosanjh said the recent attacks in Paris by Islamic extremists show these struggles are not over.

The Wallenberg-Sugihara Civil Courage Award was established in memory of Raoul Wallenberg and Chiune Sugihara who helped Jews flee Europe during the Holocaust.

"We want to inspire people especially the younger generation to stand up against injustice and to help make the world a better place," she said.