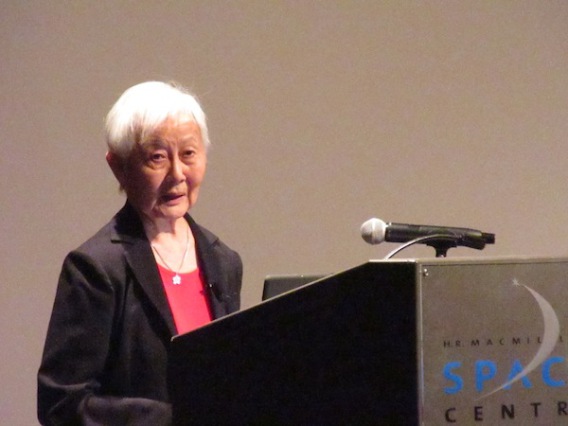 At a convocation ceremony at the University of British Columbia in 2012, a group of graduates stood out from the rest. Twenty-one elderly Japanese-Canadians, ranging in age from 89 to 96, were awarded honorary degrees in recognition of an historic injustice that had taken place 70 years earlier.

In the winter of early 1942, right after Japan’s attack on Pearl Harbour, the Government of Canada ordered all Japanese-Canadians to be relocated from the coast. This included students at UBC. For the next seven decades, the injustice went unrectified and largely unrecognized by the university until Mary Kitagawa, a community leader whose own family history was ruptured by the events of the war years, took up the cause. It was her tenacity that led the university to acknowledge and make some amends for its complicity in the injustice. It awarded honorary degrees to 96 students – most of them posthumously.

In her remarks upon receiving the award, Kitagawa reflected on the social conditions that permitted the internment of Canadians of Japanese descent.

“This happened because those in power in Canada at that time forgot that this was a democratic country, sending her men and women to war to preserve our freedom,” she told a packed auditorium at the H.R. MacMillan Space Centre. “The excuse they used for incarcerating us was that we were a security risk. However, if you read all the newspaper headlines of the 1930s and ’40s, you will find that the B.C. politicians’ hatred of Japanese-Canadians was deep and abiding. They wanted to ethnically cleanse this one small group of people from the province.”

Kitagawa said that, at a January 1942 meeting in Ottawa to address “the Japanese problem,” a B.C. representative declared, “The bombing of Pearl Harbour was a heaven-sent gift to the people of British Columbia to rid B.C. of Japanese economic menace forevermore.”

My family was swept away from our home in this storm of hatred,” Kitagawa said. From their home on Salt Spring Island, the family was transported to Hastings Park, in East Vancouver, which served as an assembly point for dispersal to the interior of the province.

“Our journey through incarceration was brutal and dehumanizing,” she said. The family was separated from her father for six months and they feared the very worst. Eventually, the family was reunited, but they were moved from place to place around the interior of British Columbia and in Alberta a dozen times during seven years of incarceration.

When the War Measures Act, under which the internment was justified, ceased its effect at the end of the war, Parliament passed successive “emergency” laws to permit the continued incarceration through 1947, and it was April 1949 before Japanese-Canadians were granted freedom of movement and permitted to return to the coast. Her father and mother, aged 55 and 50 respectively, took the family back to Salt Spring and began all over again.

“It wasn’t just the material things that they lost,” Kitagawa reflected. “They lost the dream for the future they had planned, their community, their opportunities, education for their children, their friends, their youth, their culture, language and heirlooms. But never – they never lost their pride nor their dignity.… My parents believed in forgiveness. Like Nelson Mandela, they believed that forgiveness liberates the soul. They refused to look back in anger. Instead, they chose to continue to move forward with the same resolve that helped them to survive their terrible experience.”

In 2006, Kitagawa read in the Vancouver Sun that a federal building on Burrard Street in Vancouver was being named to honour Howard Charles Green, a longtime Conservative member of Parliament from Vancouver and a leading advocate of Japanese-Canadian internment. “Immediately, I knew that I had to have that name erased from that building. To me, no person who helped destroy my parents’ dream and made them suffer so grievously was going to be so honoured.”

With help from a quickly mobilized group of activists and sympathetic media coverage, Kitagawa successfully had Green’s name stripped from the building, which was renamed in honour of Douglas Jung, another Conservative MP, but the first MP of Chinese-Canadian heritage.

In her talk on Sunday, Kitagawa emotionally credited an “unsung hero,” her husband Tosh, who, among other efforts he played in supporting Kitagawa’s activism, spearheaded the reprinting of the 1942 UBC yearbook to include information about the internment and biographies of the students affected. It was also through his persistence that they were able to track down the 23 living students and the families of those who had passed away.

The Civil Courage Award is presented by the Wallenberg-Sugihara Civil Courage Society, which was formed by members of the Swedish and Jewish communities in Vancouver.

Raoul Wallenberg was a Swedish architect, businessman, diplomat and humanitarian who became Sweden’s special envoy to Hungary in the summer of 1944, several months after the Nazi deportation of Hungarian Jews had begun. He issued protective passports and sheltered people in buildings that were declared to be Swedish territory, saving tens of thousands of Jews. He was taken into Soviet captivity on Jan. 17, 1945, and was never seen again.

Chiune Sugihara was a Japanese diplomat who served as the vice-consul in Lithuania during the Second World War. Acting in direct violation of his orders at great risk to himself and his family, he issued transit visas that allowed approximately 6,000 Jewish people from Poland and from Lithuania to escape probable death.

The award presentation was followed by a screening of the 1995 film The War Between Us, which dramatizes the events of the Japanese-Canadian experience through the lives of a single family.

Councillor Pete Fry, Vancouver’s deputy mayor, read a proclamation from the city. Consular officials from Sweden and Japan were in attendance.