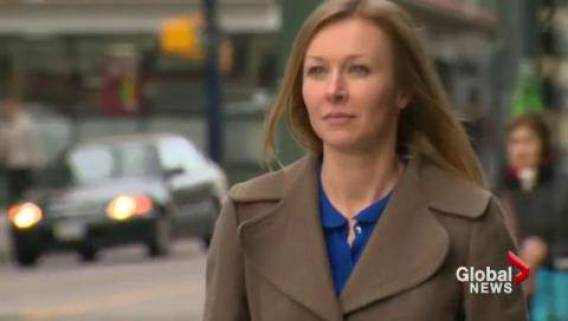 It’s a big city view from Alayne Fleischmann’s Vancouver apartment, but there’s another metropolis that the woman from Terrace, B.C. spends a lot of her time thinking about — New York.

Fleischmann is a lawyer, who went from the University of British Columbia to Cornell University, before ending up on Wall Street.

It was a dream opportunity for many, but after a few years in New York things took a strange twist.

In 2006, she started working at JPMorgan Chase, currently the largest bank in the U.S. “We did mortgage-backed securities,” she told Global News.

Mortgage-backed securities are investment products made out of home mortgages that were bundled up and resold.

But, Fleischmann noticed something seriously wrong with the products she was managing.

“They were purchasing these loans that they knew people couldn’t pay back,” Fleischmann said.

Fleischmann tried to warn her bosses, but was stunned when she was told not to write e-mails about the problem she claimed to see. “This [was] a massive fraud against ordinary American.”

Those products turned out to be so toxic that they triggered the worst recession since the Great Depression. Millions lost their jobs and, for a time, the global financial system teetered on collapse.

Fleischmann wound up getting laid off from J.P. Morgan Chase and has had to move around a lot ever since.

“It hasn’t been easy,” she said. “Partially, when you’re looking for work and you have mortgage-backed securities as, really, my entire time as a lawyer.”

But, it turned out that Fleischmann left enough of a paper trail about her concerns and years later her warnings got into the hands of U.S. government investigators.

JPMorgan Chase wound up having to pay a US $9-billion fine — the largest fine, yet, that any bank has had to pay in connection to the financial crisis — making her one of the era’s biggest whistleblowers. Rolling Stone recently dubbed her the “$9 billion witness.”

But, she credits what she did to her small town upbringing and the values she learned growing up. “There are certain things that you’re not allowed to do. Stealing is one of them,” she said.

If Fleischmann was stunned by the culture she saw on Wall Street, with her story making headlines around the world it looks like Wall Street didn’t see her coming either.

With files from Paul Johnson