Translation of an article in the Vancouver Shinpo on January 24, 2019.

The Japanese-Canadian Mary Kitagawa was chosen this year for the Wallenberg-Sugihara Society’s (WSCCS) Civil Courage Award, which is presented to a British Columbian who by their courageous behaviour has made a significant impact on society.  Mrs Kitagawa, who spoke at the awards ceremony January 20 at the HR  MacMillan Space Centre, stressed the importance of raising one’s voice to do the right thing without fear of public backlash.

After the ceremony, the film “The War Between Us” was screened.  It was set in the town of Greenwood, where Nikkei [Japanese-Canadians] were forcibly interned. 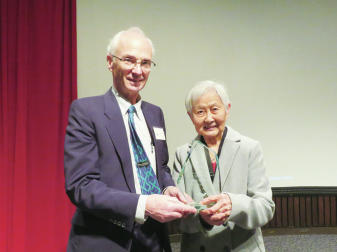 Mrs Kitagawa worked for three years to get the University of British Columbia to give degrees to former Japanese-Canadians enrolled in studies there, because they were deprived of their schooling by the Canadian government’s policy of forced migration.  As a result of her efforts, UBC awarded honorary degrees to 76 former students in 2012.

Also, in 2006, the then federal Conservative government decided to name a building in downtown Vancouver after Vancouverite Howard Charles Green, a Conservative parliamentarian.  Green was one of the key figures to promote the policy of internment of Japanese Canadians.  Mrs Kitagawa mounted an opposition campaign to this decision.  As a result, in September 2007 the building was named after the former federal Conservative party member Douglas Jung from Vancouver, the first Chinese-Canadian in parliament.

This award is a recognition of what she achieved by raising her voice to rectify the still-remaining unjust treatment of Japanese-Canadians.

Mrs Kitagawa said, “I was very surprised, to be honest.  I’m not an activist myself.”  However, she added, “I have always tried to get a fair and reasonably correct assessment”.  She thinks that Japanese-Canadians should raise their voices for a legitimate complaint.  That will move history ahead.  “My husband and I have been doing our best.  Unless someone speaks up, their history will not be known to anyone.”

When she heard the news about Mr Green’s name, she was surprised, she recalls.  “I decided that we have to stop this,” she said.  “Whenever there is such news, the media picks it up and the facts come out.  That’s why we need to speak up.”

“Don’t be afraid that someone will cause a backlash.  It is important to act with firm determination.  This is what I was taught by my parents.  This is why I’m always shouting loudly!” she laughs.

On this day the Japanese Consul-General Masayo Tada and the honorary Swedish consul Thomas Gradin attended.  “I would like to thank Mrs Kitagawa and the society for their long-standing belief and efforts to give honorary degrees to the students of UBC, and I was able to learn more about her achievements” said Consul-General Tada, who was delighted this Nikkei had received an award.  Honorary Consul Gradin said, “The history of Nikkei that I have known from newspapers and television so far is fragmentary, but I understand it better from the movie”.  He added that the ceremony organized by the society presents the story with a meaningful message using methods such as film screenings, and that as far as he knows, this event is held only in Vancouver.

Raoul Wallenberg Day is a commemorative event sponsored by WSCCS, honouring the achievements of Swedish diplomat Raoul Wallenberg, who saved thousands of Jews regardless of the danger to himself in Budapest, Hungary, in 1944 during WWII.  An annual event each January, this is the 14th year.

Chiune Sugihara was a Japanese diplomat in Kaunas, Lithuania, in 1940, who disregarded the risk to himself and saved many Jews by issuing so-called “Visas for Life”.  President Alan Le Fevre explained that the name Sugihara is part of the society’s name because there are members of the society who are alive due to their parents being saved by Sugihara’s visas.  So the society is named after the two diplomats.

Originally the event involved only the screening of related films, but since 2015 the Civil Courage Award has been presented to those who have had a great influence on society by courageous actions like Wallenberg and Sugihara.  The association, established in 2013, is composed of members of the Swedish and Jewish communities and has taken over the previous Raoul Wallenberg Day since that time.  Society site: https://www.wsccs.ca