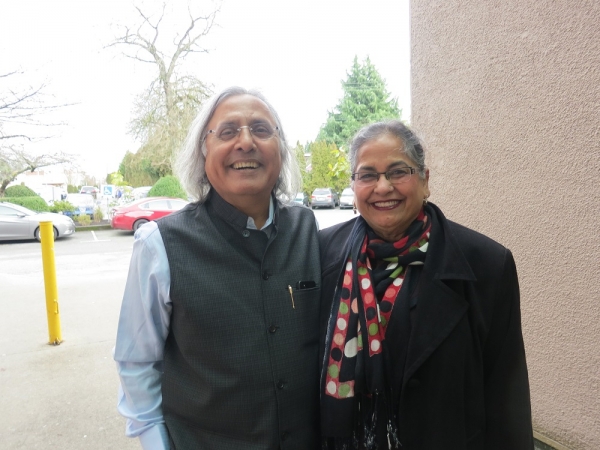 Ujjal Dosanjh says his wife, Raminder, has stood by him “unflinchingly like a rock” over the years.

The recent murder of 17 people at the satirical weekly Charlie Hebdo and at a Jewish supermarket in Paris was on the minds of many as they filed into the Wosk Auditorium to commemorate Vancouver’s 10th annual Raoul Wallenberg Day.

This weekend marks the 70th anniversary of the disappearance of Wallenberg, a Swedish architect, businessman, and diplomat who saved up to 100,000 Jews in Hungary during the Second World War.

“He did this at great peril to himself,” Grayman noted. “Following the Soviet capture of Budapest in 1945, Wallenberg was taken to a Russian prison on January 17, never to be seen again.”

One of the society’s directors, Deborah Ross-Grayman, then talked about Chiune Sugihara, who was the Japanese vice-consul in Lithuania during the Second World War. Like Wallenberg, Sugihara also used his diplomatic position to save Jews who faced certain death in Nazi-controlled Eastern Europe.

According to Ross-Grayman, more than 6,000 Jews were protected by Sugihara granting them transit visas in violation of Japanese government orders.

“My own mother, Niuta Ramm, was the recipient of such a visa,” Ross-Grayman said. “In 1941, she travelled on a trans-Siberian railway across Russia to Vladivostok, where she took a boat to Japan. She had many difficulties on the way and almost didn’t make it. But make it she did. My mother lived with other refugees in Kobe, Japan, for six months when, just before Pearl Harbor, she was sent to Shanghai, where she survived the Holocaust.”

She added that she lives in gratitude every day for what Sugihara did for her mother. The Wallenberg-Sugihara Society honours the accomplishments of these two diplomats.

“As you see, one person can make a difference,” Ross-Grayman said.

In the 1980s, Dosanjh frequently spoke out against Sikh extremism at great personal risk. Once, he was beaten over the head with a steel pipe after leaving his law office. Much to people’s surprise, he continued calling for peace from his hospital bed with his head wrapped up in bandages.

Later, when he was an MP, Dosanjh’s office was firebombed and he continued to receive threats.

“It is a tremendous honour to be recognized in the name of Raoul Wallenberg or Sugihara,” Dosanjh said. “It means a lot. It means a lot in the current environment that we live in today in the world. So I accept this award humbly. I will accept it in the name of the victims of terror at Charlie Hebdo and the Jewish supermarket in Paris.”

He emphasized that Canada is no stranger to terrorism, citing the Air India bombing, which was conceived and executed in Canada, as well as the FLQ crisis, the Toronto 18 arrests, the Squamish Five, and the recent murder of two Canadian soldiers by extremists.

He went on to describe ISIS as “infidels”.

He said praised his “co-conspirators” who’ve been with him through the years, as well as his extended family, his three sons, and his grandchildren. He pointed out that his wife, Raminder, has “stood with me unflinchingly, like a rock”.

“My inner determination has always flowed from my heroes,” Dosanjh revealed. “My hero, my father, Pritan Singh Dosanjh, my hero, my grandfather, Moola Singh Bains, and my hero, Mahatma Gandhi, the father of the nation I deserted to become Canadian.”