Translation of an article for the Vancouver Shinpo, a Japanese weekly newspaper in Canada, printed on January 19th, 2017.

The annual Raoul Wallenberg Day was held in the afternoon on January 15th at the MacMillan Space Centre, Vancouver.

This year’s event was a tribute to “Médecins sans Frontières” (Doctors without Borders), who provide humanitarian aid and medical care to people in war zones.

Raoul Wallenberg was a Swedish diplomat who helped Jewish people in Nazi-occupied Hungary during World War II. With Sweden’s neutrality, he issued “protection certificates” to endangered Jews, and sheltered them in safe places, using his diplomatic privilege. It is said that his actions saved nearly 100,000 lives.

In January 1945, after Germany withdrew from Budapest, the Soviet Army entered the city. Wallenberg reported as requested to the Soviet headquarters, after which there was no news of him.

In Lithuania, the Japanese diplomat Chiune Sugihara issued transit visas to Jews who were trying to escape from Europe, against the orders of his government. It was a decision that might endanger his job and family. Thanks to those visas, thousands of lives were saved. 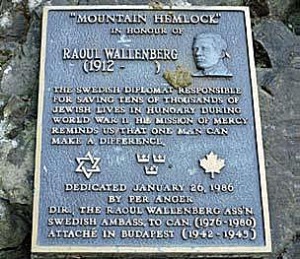 The Raoul Wallenberg plaque in Queen Elizabeth Park, Vancouver, describing Wallenberg’s achievements.  The date of death, being unknown, is not inscribed.

In Vancouver, since 2006, “Wallenberg Day” has been held in mid-January, co-hosted by the Swedish consulate, local Jewish groups and related organizations, with lectures and film screenings.

In 2013, Swedish and the Jewish community members formed the “Wallenberg-Sugihara Civil Courage Society” (WSCCS), and assumed the event.

The ideas are to recognize people, like Wallenberg and Sugihara, who, despite danger and risk to themselves, following their beliefs and morality, helped others and confronted injustice, and to enlighten society with their spirit. Awards to these recognized individuals have been included in “Wallenberg Day” programs.

■ Courageous individuals who have helped others

In 2015, the first “Civil Courage Award” was presented to former British Columbian Premier Ujjal Dosanjh. Dosanjh, born in India, warned of the activities of Sikh extremists in Canada and denounced them. He was beaten and seriously injured for his efforts to promote social justice and eliminate violence. His office was also bombed.

In 2016, Dr. Robert Joseph, a First Nations chief of British Columbia, received the award. Joseph, who was mentally and physically abused in government-created residential schools for 11 years, spoke publicly of his past suffering, undaunted by the reluctance of First Nations people with similar experiences, and protests from Canadian society.

He is dedicated to healing and reconciliation among people and encouraging better understanding of diverse values.

This year no individual received the award, but the WSCCS paid tribute to the international organization “Médecins Sans Frontières” (MSF).

MSF, with bases operating in 21 countries, brings medical assistance and humanitarian aid to over 70 countries and areas torn apart by war and disaster. Their members include not only doctors, but also those from various fields: nurses, educators, engineers and other experts. In 1999, they won the Nobel Peace Prize for their work.

One of the MSF doctors, Dr. Joseph Copeland of the BC Children’s Hospital took the podium and gave a lecture about his three months of activities in Cameroon, showing photos of his work there. He spoke about the reality that both civilians and medics have been the targets of attacks, and asked the audience to consider what they can do, even as individuals, to stand up and help people in great difficulty.

After the lecture, the film “Access to the Danger Zone”, depicting the activities of the MSF, was shown. The images conveying the struggles of the MSF members giving medical care while risking their lives, and showing the pain and suffering of women and children, compelled the audience to be deeply moved by Dr. Copeland’s appeal, “Even in war, there are rules.” 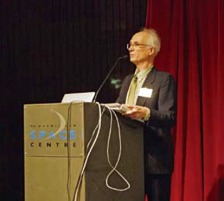 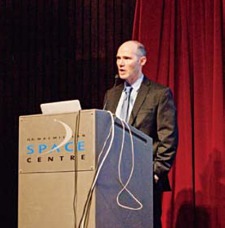 Joseph Copeland during his lecture