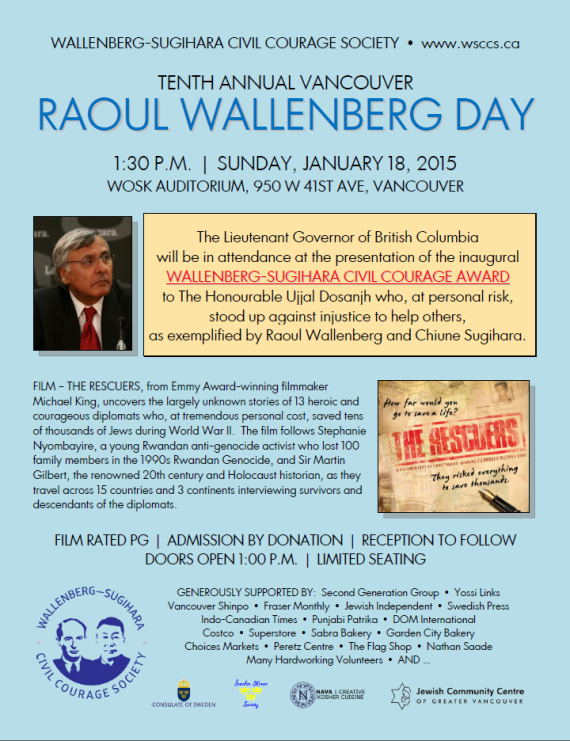 Ujjal and I congratulate you and the entire Board of Directors of the Wallenberg-Sugihara Civil Courage Society for a well organized Tenth Annual Raoul Wallenberg Day Celebration.  We sincerely extend our appreciation to the Board of Directors and the Award Selection Committee for their time and effort in choosing Ujjal as the recipient of the Inaugural Wallenberg-Sugihara Civil Courage Award.  We were touched by this high honour and your generosity.

I have had tremendously positive feedback from those who attended the function, about how well the event was organized and how deep the documentary touched their hearts.

Personally for Ujjal and I it was very rewarding to know there are people who appreciate and recognize the need for standing up and speaking in difficult times.  For those few moments I totally forgot the terrible times we lived through in the mid 80s amidst threats that our children would be kidnapped, the house fire bombed or Ujjal would be killed if he didn’t shut up.  It was the support and encouragement from brave friends and supporters that kept us going at that time.  And at the award ceremony it was gratifying to see the outpouring of support and appreciation from the known and unknown faces in the auditorium.

The terrorism in France had brought back the terrible memories but the overwhelming support in the room, the touching remarks made by you, Henry and the Hon. Judith Guichon the Lieutenant Governor of British Columbia were all so inspiring and rewarding.

Please accept our heartfelt thanks.

“Our lives begin to end the day we become silent about things that matter.” M.L.K.
“You must be the change you wish to see in the world.” Gandhi