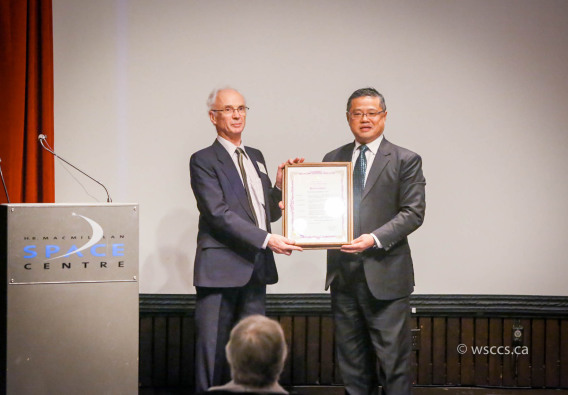 “If we had a society that was free from embezzlement, free of theft, free of dishonesty, free of unethical conduct, we wouldn’t need whistleblowers. But, unfortunately, we are not a perfect society,” said Ujjal Dosanjh in his keynote address at the 13th annual Raoul Wallenberg Day event, which was held on Jan. 14 at the H.R. MacMillan Space Centre.

Dosanjh, a former federal cabinet minister, B.C. attorney general and the province’s 33rd premier, was, in 2015, the inaugural recipient of the Wallenberg-Sugihara Civil Courage Society’s Civil Courage Award. He was recognized for “his great courage in the face of escalating violence by extremists in the Indo-Canadian community that arose from conflicts that had erupted in India,” said WSCCS board member Ana Policzer in her remarks on Sunday.

The society hosts the annual Wallenberg Day event and, this year, they honoured Vancouver-based lawyer Alayne Fleischmann with the Civil Courage Award.

Fleischmann was born in Terrace, B.C. She got her bachelor’s degree in philosophy from the University of British Columbia, her master’s in international and comparative law from the Institute of International and Comparative Law, Cornell Law School and Université Paris (Sorbonne), and her juris doctor degree from Cornell. In 2006, she was working in quality control at JPMorgan Chase in New York. There, she discovered and tried to stop what she described as “massive criminal securities fraud” – mortgage operations similar to those of many other financial institutions, which led to the 2008 economic collapse. Her efforts resulted in a $9 billion fine being levied on JPMorgan Chase, but no one from the bank was ever prosecuted. She moved back to British Columbia in 2008.

In a 2014 Rolling Stone article, writer Matt Taibbi goes into great detail about Fleischmann’s experiences, the difficulties she faced in bringing the truth to light and the limited impact the truth played in whatever minor justice was carried out against all the banks guilty of mortgage-related wrongdoings. In effect, Taibbi argues, the U.S. department of justice “struck a series of historic settlement deals with Chase, Citigroup and Bank of America. The root bargain in these deals was cash for secrecy. The banks paid big fines, without trials or even judges – only secret negotiations that typically ended with the public shown nothing but vague, quasi-official papers called ‘statements of facts,’ which were conveniently devoid of anything like actual facts.”

The full Rolling Stone article can be accessed via wsccs.ca/wallenberg-days/2018. At the Wallenberg Day event, organizers screened a 2014 interview with Taibbi and Fleischmann by Democracy Now! WSCCS president Alan Le Fevre also spoke briefly about Fleischmann’s actions and why she was chosen to receive the Civil Courage Award. Unfortunately, Fleischmann could not accept the award in person because of the ongoing litigation.

In his remarks, Dosanjh saluted whistleblowers. “In Canada,” he said, “we don’t know too many of our own heroes…. But we have them. One that we have amongst us in Canada is the honouree tonight, Alayne Fleischmann.”

There are monetary costs to illegitimate or immoral actions, Dosanjh said, but such actions also “jeopardize the health, safety and well-being of the employees, the customers and the society of the institutions.”

Whistleblowers like Fleischmann set out to right a wrong, he said. They are morally compelled to the point where they take the “risk of losing their careers,” “being ostracized” and having rumours spread about them to “delegitimize the truth that they’re trying to tell.”

After such individuals come forward, he said, “life is never the same. You lose friends, you lose relationships, obviously you lose a job possibly, or you’re not promoted or you’re demoted…. And, sometimes, it can be dangerous physically. People have been known to be killed, at least across the border, for trying to expose the truth. Karen Silkwood comes to mind.”

Dosanjh warned that whistleblowers aren’t always correct, however, giving the example of eight B.C. health ministry workers who were found to have been wrongly dismissed in 2012, amid allegations of wrongdoing. “It’s a risky business,” he said. “You’re playing with your own life but you’re also playing with the lives of others you’re trying to expose.” So, you have to not only have the courage to speak up, he said, but the wisdom to know when to not do so, or when to investigate further before doing so.

Several audience members gave their take on corporate and government corruption in the question-and-answer period. Dosanjh said people need to get more vocal about these issues. “There is no silver bullet to deal with any particular issue,” he said. “It’s just a matter of becoming more active politically and raising your voices.”

To an audience member who decried greed as criminal, Dosanjh said, “If you say greed is the basic urge to make more money, that shouldn’t be a crime…. You want to make money, you want to work more … that’s what keeps the world going…. Illegal greed should be a crime – and it already is! The fact is we’re not prosecuting criminals, we’re not apprehending them, we’re not investigating them as much as we should, and we’re falling down in some respects.”

The afternoon event also included the reading by Acting Mayor Raymond Louie of the City of Vancouver proclamation of Jan. 14 as Raoul Wallenberg Day. He thanked event organizers and attendees for taking the time “to remember and to also recommit … with this ongoing effort to have a better world overall.”

The WSCCS is continually “seeking to identify people who, at significant personal risk, have helped to improve or save the lives of others by going against unjust laws or conventions.” For more information, visit wsccs.ca.