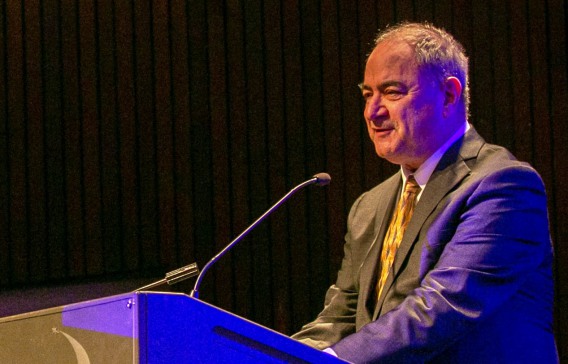 Japanese diplomat Chiune Sugihara was honoured in Vancouver this month with a lecture on his wartime heroism – by a man who owes his life to the actions of Sugihara when the diplomat served as consul for the Imperial Japanese government in Lithuania, near the start of the Second World War.

George Bluman, a professor emeritus of mathematics at the University of British Columbia, spoke at the 15th annual Raoul Wallenberg Day commemoration Jan. 19, which was held at the H.R. MacMillan Space Centre. The annual event is presented by the Wallenberg-Sugihara Civil Courage Society and took place 75 years and two days after Wallenberg, a Swedish diplomat in Hungary whose actions saved the lives of tens of thousands of Jews, was last seen alive. The actions of Sugihara, vice-consul of the Japanese embassy in Kaunas, Lithuania, paralleled those of Wallenberg in that he issued visas and took extraordinary actions to save the lives of the threatened Jews of Europe.

Bluman’s parents, Nathan and Susan Bluman, fled to Lithuania after Germany invaded Poland in 1939. There, they received transit visas from Sugihara, which enabled them to travel through the Soviet Union to Japan. They then obtained temporary permits to enter Canada and they were aboard the last ship sailing from Japan to Vancouver prior to the attack on Pearl Harbor.

An estimated 15% of Sugihara survivors became Canadians, many of them remaining in Vancouver, including the Bluman family, which has come to number 23, now including great-grandchildren of Susan and Nathan. It is estimated that Sugihara’s actions facilitated the escape of thousands of Jewish refugees.

In addition to the Sugihara descendants living in Vancouver, Bluman noted an additional local connection. On his way to Europe for the series of diplomatic postings that would lead to his heroic acts, Sugihara and his wife Yukiko arrived by ship in Vancouver in 1937, then took a transcontinental train to the East Coast to board another ship, which would take them to Europe.

A 2017 poll in a Tokyo publication rated Sugihara as the most important Japanese person ever. “Why?” Bluman asked. “Against advice from his superiors in Tokyo, he issued transit visas to Japan that ended up saving about 2,100 Jewish refugees who otherwise would have been likely murdered. Those saved included my parents as well as one of my uncles and his wife.… Perhaps as many as 40,000 people owe their lives due to the extraordinary heroic deeds of Sugihara.”

Two diplomats from the Netherlands played crucial roles in Sugihara’s heroics, Bluman said. After the Nazi occupation of that country, in May 1940, an anti-Nazi Dutch government-in-exile was established in London and remained in charge of all Dutch embassies. The anti-Nazi Dutch ambassador in Latvia, L.P.J. de Decker, dismissed his pro-Nazi Lithuanian honorary consul, replacing him with Jan Zwartendijk, a Dutch engineer heading Philips electronics in Kaunas.

“Two young Dutch rabbinical students approached Zwartendijk, requesting documentation to go to Curaçao, a Dutch colony in the West Indies, with the aim of traveling east through the Soviet Union, Japan, the Pacific Ocean and the Panama Canal to tiny Curaçao, an island off the coast of Venezuela, about one-sixth the size of Metro Vancouver. They also sought permits for their mostly Polish classmates.

“Why Curaçao?” asked Bluman. “Because no visa was required to enter Curaçao. The local governor had sole authority to permit entry. But this was rarely granted. Zwartendijk was given permission by de Decker, the Dutch ambassador in Riga [Latvia], to issue permits to Curaçao to their fellow rabbinical students that stated, in French, ‘A visa for entry is not required,’ leaving out the condition of the governor’s permission. Moreover, Zwartendijk courageously agreed to issue such permits to all Jewish refugees who applied for them.”

A delegation of Jewish refugees approached Sugihara about obtaining Japanese transit visas, a necessary step for the scheme’s success.

“Without permission from Tokyo, and after getting Soviet approval, signed by Stalin, for refugee transit through the Soviet Union, Sugihara issued transit visas valid for a stay of 10 days in Japan, based on the seemingly sufficient Zwartendijk Curaçao permits,” said Bluman. “Zwartendijk signed 2,300 such permits, until his office was forced to close on the day Lithuania was annexed by the Soviet Union.… The scam worked.”

With the annexation of the Baltic states to the Soviet Union, all foreign embassies were ordered closed. Though Zwartendijk left, Sugihara managed to stay on for a further four weeks to continue writing transit visas – even for Jews who had not obtained a visa from Zwartendijk.

Ultimately, about 80% of the Jewish refugees issued Sugihara visas survived and about three-quarters made it to Japan. Almost half carried on to Shanghai, China, to wait out the war.

Sugihara’s diplomatic career effectively ended in Romania, where he was posted at the end of the war. When the Soviets occupied Bucharest, Sugihara and his family were imprisoned in a prisoner-of-war camp for 18 months.

Back in Japan in 1946, Sugihara was dismissed from diplomatic service and spent the next several decades in low-key positions in Japan and Moscow. His retirement from service was ostensibly a matter of downsizing, but some have speculated that his heroic insubordination was a cause.

Only in 1968 did Sugihara learn that most of the Jews he had helped had survived. In 1985, he was recognized by the state of Israel, receiving the Righteous Among the Nations award from Yad Vashem, as well as perpetual Israeli citizenship for himself and his family. Zwartendijk was posthumously honoured in 1997. Sugihara died in 1986, at the age of 86. Bluman retains close contact with the family in Japan.

“In my family,” Bluman concluded, “there is one great hero we always carry in our hearts and to whom we will be forever grateful: Chiune Sugihara.”

After Bluman’s presentation, attendees watched the film Persona Non Grata: The Story of Chiune Sugihara. Earlier, Alan La Fevre, president of the Wallenberg-Sugihara Civil Courage Society, welcomed guests, including the deputy mayor of the city of Vancouver, Christine Boyle, who read a proclamation declaring Raoul Wallenberg Day. Diplomats from Japan and Ukraine were in attendance.

The Wallenberg-Sugihara Civil Courage Society was formed in 2013 by members of the Swedish and Jewish communities. The society continues the legacy of the annual Wallenberg Day events in Vancouver, recognizing and honouring individuals who, at great personal risk, have helped others by acting against unjust laws, norms or conventions.