A day to honor civil courage 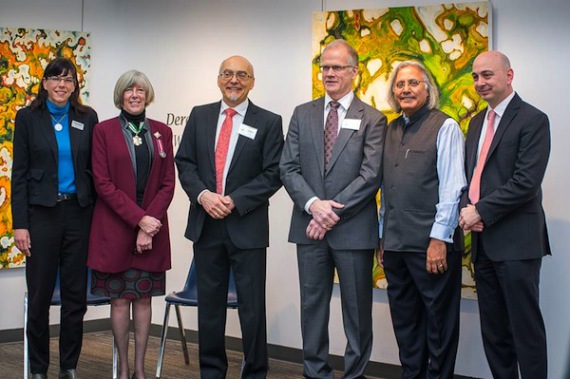 Ujjal Dosanjh, former premier of British Columbia and one-time federal cabinet minister, was recognized for civil courage at a ceremony at the Jewish Community Centre of Greater Vancouver on Jan. 18. The event marked the annual Wallenberg Day commemoration in the city, and the award was bestowed in the name of two extraordinary individuals whose actions during the Second World War resulted in the survival of tens of thousands of European Jews.

Dosanjh is the first recipient of the Wallenberg-Sugihara Civil Courage Award. In particular, Dosanjh was recognized for speaking out about political and religious violence in Canada’s Sikh community – notably, a warning in 1985 that Sikh extremism in India could target Canadians. A few months later, 280 Canadians were among 329 people killed when Air India Flight 182 was bombed. More generally, Dosanjh was recognized for a lifetime of contributions to British Columbia and Canada. (See story in the Jan. 9, 2015, issue of the Independent.)

The first annual award was presented at the 10th anniversary commemoration of Wallenberg Day, which honors Raoul Wallenberg who, as a Swedish diplomat in Budapest, issued visas that saved thousands of Jews. The Soviet military entered Hungary in January 1945, and Wallenberg was detained on suspicion of subversive activities. He was never seen again. The commemoration, which was initiated by Anders Neumuller, a former honorary Swedish consul to Vancouver, is now presented by the Wallenberg-Sugihara Civil Courage Society, which, along with Wallenberg, commemorates Chiune Sugihara, a consular representative of Imperial Japan in Lithuania who, similar to Wallenberg, issued visas that allowed thousands of Jews to escape Nazi-occupied Europe.

Henry Grayman, president of the society, explained that it was founded in 2013 by Swedes and Jews to honor and encourage acts of civil courage like those exemplified by Sugihara and Wallenberg.

The impact of acts of civil courage was made evident by Grayman’s wife, Deborah Ross-Grayman, who emceed the afternoon event. She credits her life to the war-era acts of Sugihara.

“I am the breath and the face of civil courage,” she said. “My own mother, Niuta Ramm, was the recipient of such a visa…. I live each day in gratitude for what has been given to me.”

She invited others in the audience whose survival could be credited to the acts of individuals like Sugihara or Wallenberg to stand, and close to a dozen people rose from their seats.

“As you see, one person can make a difference,” she said.

“I am absolutely humbled,” Dosanjh said. “It’s a great honor to be recognized in the names of Raoul Wallenberg and Chiune Sugihara.”

In turn, he said, he accepted the recognition in the name of victims of violence in recent days at Charlie Hebdo and the Jewish supermarket in Paris. He also gave thanks to his heroes – including his grandfather, and Mahatma Gandhi, “the father of the nation I deserted to become Canadian” – and also those who have stood by him during difficult times.

The lieutenant-governor said Dosanjh has “devoted his life to standing firm against injustice and against violence … he’s served and served.”

The viceroy added that it is more important than ever to celebrate and sing the praises of heroes with at least the vigor “as that with which the deeds of villains are reported.”

Deputy Mayor and Vancouver City Councilor Andrea Reimer brought greetings from the city and read a proclamation from the mayor. She urged people to take the opportunity in 2015 to prove that actions make a difference.

In addition to Sweden’s Gradin, consular representatives were also in attendance representing Japan, Switzerland and Mongolia.

After the presentation, a feature-length film was screened. The Rescuers features diplomats and government officials from diverse places whose actions saved the lives of thousands of Europe’s imperiled Jews.

Pat Johnson is a Vancouver writer and principal in PRsuasiveMedia.com.