“Risking one’s life to get the story, to show the suffering, to try to make a difference, to stop the madness.”  This is how Egyptian-Canadian journalist Mohamed Fahmy describes his job.*  The numbers confirm those risks. Worldwide in 2020, 32 journalists were killed, 274 imprisoned, and 64 are missing.**  In that increasingly fraught atmosphere, responsible journalists work to maintain the bedrock of accountable government and human rights: uncensored, reliable information.  More than ever before, journalists have to muster civil courage in order to do their important work.

To honour Wallenberg Day 2021, please join us as we explore stories of journalists who exhibit civil courage in order to provide factual news coverage in the face of threats, harassment, and attempts at censorship.

Please select the interviews and films below to view them

- Special thanks to Julia Haas for facilitating the interview and film.

NOTE: THE FILM WILL BE AVAILABLE UNTIL JANUARY 24

- “A Dark Place: A #SOFJO Documentary” (Safety of Female Journalists Online)
- Directed by Javier Luque
- Produced by OSCE Representative on Freedom of the Media (Organization for Security and Co-operation in Europe), in cooperation with the IPI (International Press Institute).

”A Dark Place” – The online safety of female journalists goes beyond gender equality and press freedom, directly impacting the quality of our democracies and the public’s right to diverse sources of news.  The film documents the experiences of female journalists targeted with online violence and includes commentary by international experts on human rights, gender issues, and media freedom.

Robert Hackett, Professor Emeritus of Communication, Simon Fraser University, has written extensively on media democratization and journalism as political communication.  In conversation with WSCCS’s Gene Homel, he presents his perspective on civil courage of journalists.

”Mohamed Fahmy: Half Free” (2015) is a CBC documentary study of the courageous actions of Canadian-Egyptian journalist Mohamed Fahmy, who was jailed in Egypt for pursuing the truth as he reported on the Arab Spring uprising in Cairo.  Fahmy’s story exemplifies the difficult decisions that journalists face daily, risking their freedom and even their lives to report facts from conflict zones around the world. 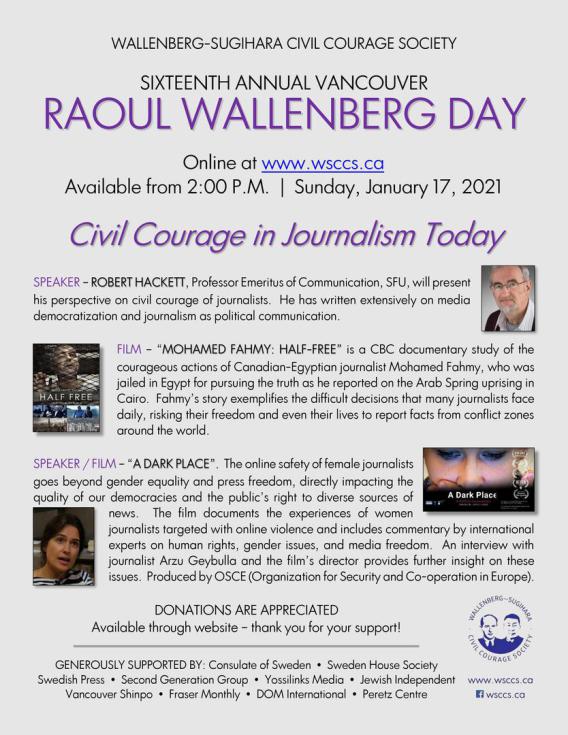