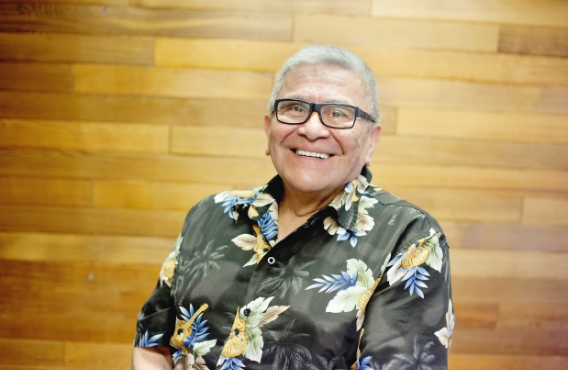 PHOTO - Robert Joseph, the hereditary chief of the Gwawaenuk First Nation near Alert Bay and a Residential School survivor.

Robert Joseph, the hereditary chief of the tiny Gwawaenuk First Nation near Alert Bay, will be presented with the 2016 Wallenberg-Sugihara Civil Courage Award on Jan. 17 in Vancouver.

The 76-year-old Joseph, who was sent to St. Michael’s Indian Residential School at six years of age where he spent 11 years enduring physical, sexual and emotional abuse and isolation, will receive the award at the Wosk Auditorium.

The award is presented to an individual who, at significant personal risk or after facing severe oppression, courageously stood up against social injustice to help others.

Joseph, co-founder of Reconciliation Canada and the recipient of an honourary doctorate of law degree from the University of B.C., overcame his addiction and dedicated his life to helping other residential school survivors break the cycle of anger, dysfunction, addiction and violence.

He spoke with The Vancouver Sun earlier this week.

Q: What does it mean to receive this award?

A: I’m really honoured and humbled to be acknowledged by people whose histories have been very conflicted and harmful. And for them to think about me and the situation we’ve had here in Canada with residential schools, I think is really significant.

Q: What do you remember most from your experience at a residential school?

A: I think what I remember most about that experience and its sum total is that it absolutely had long-term destructive and negative impacts on my life afterwards. As a result of those incidents, I grew up very traumatized. When those traumas haunt you and you haven’t resolved them, they can lead to a very dysfunctional lifestyle.

Q: You publicly shared your story at a time when many others were conflicted about doing so. Why did you choose to take this path?

A: One of the things I began to recognize in the lifestyle I had developed as a result of my experience was that if I simply lived in despair and hopelessness, I would always live that lifestyle. I recognized that sharing my story with others and others sharing their stories with me helped us to move forward from that.

Q: The recently published Truth and Reconciliation Commission report into Canada’s troubled history with indigenous peoples contained 93 recommendations towards reconciliation, and the Liberals have pledged to implement the entire report. How do you feel about Prime Minister Justin Trudeau’s response to this issue and his plan to ask Pope Francis to apologize for the Catholic Church’s role in residential schools?

A: I think that the new prime minister’s acknowledgment of the report and his commitment to meeting the recommendations really creates a lot of hope and optimism for aboriginal people in this country. What’s going to be really important is when we begin to redefine our relationships and create a sense of value and purpose for everybody in the country. I really think it would be so important for the Pope to simply say “We’re sorry”. There’s so much power in those two words.

Q: Do you feel the Canadian public has “turned the corner” in the matter of what happened at residential schools?

A: You know, when the Truth and Reconciliation Commission report came out a few months ago, the word “cultural genocide” was very shocking. But what was really important was that after that report, there was a poll taken and seven out of 10 Canadians agreed with the characterization that “cultural genocide” had been applied on little children going to residential schools. But even more importantly, those seven out of 10 wanted to find some way to reconcile over that. There has never been more awareness about our broken history, and never been as much desire to correct our mistakes.

Q: Many across Canada have called for accountability for public funds and nepotism surrounding the power base on reserves. How do you see this?